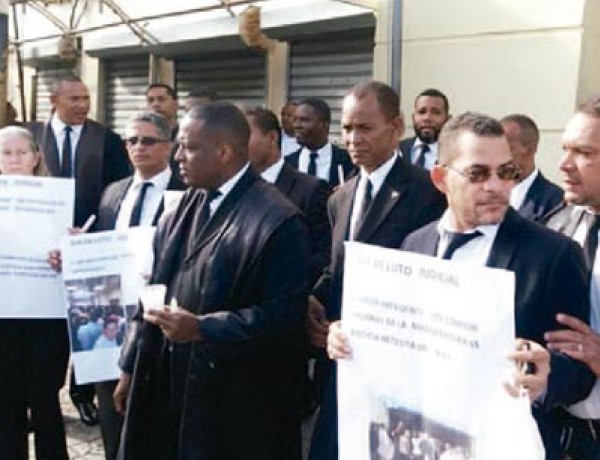 The Association of Lawyers of the Municipality Santo Domingo Este declared yesterday day of mourning of the Judicial Power due to the precarious conditions in which justice is given in that jurisdiction.

The group demanded the construction of the Palace of Justice of the Santo Domingo Province, promised in May 2015.

At present, the courthouse operates in a rented building, which until recently was for sale.

Lawyers explain that these limitations of space, otherwise without conditions, delay the processes, and affect all users: judges, prosecutors and lawyers.

According to Nerin Pérez, president of the Association, the limitations in this demarcation go beyond physical difficulties, but also that there is a problem of judicial independence, where judges feel frightened by the Judicial Council.

The state of overcrowding in which the work in that jurisdiction unfolds prevents even more staff being hired, to respond to the population of that demarcation, for which employees are overloaded and processes that could be fixed in a day, are taken up months

They denounced that a review of the coercion measure is taken in that palace for up to 45 days, an appeal can take up to 4 months, and that sometimes the date of the pre-preliminary hearings arrives, rather than appeals, which makes it more difficult the job.

They regretted that at this point, 15 years in the same situation, they continue to hold hearings of measures of coercion in a van.

They demand that the administrative areas be adapted to the procedural deadlines. they say they are not met.

Last Sunday was celebrated the Day of the Judicial Power, nevertheless the lawyers assure that the situation is not to celebrate, rather of mourning.

"It's not about the people, nor about the judges, it's about that there are no conditions to work in the small space," said Pérez.

He said that's why they need the palace, and that the judges are not pressured by the Council to be suspended.

In the framework of that celebration, the president of the Supreme Court of Justice and the Council of the Judicial Power, Mariano Germán Mejía, requested greater resources and reviewed the conditions of that judicial palace.